Skip to content
Date: January 17, 2012Author: Heather on a Rock 4 Comments
People often ask me, Heather, how did you get so cool, attractive and hilarious?
Well, mom, while most of that comes naturally to me, I think it also took a lot of exhilarating, humiliating, hilarious, hurtful and happy experiences to mold me this close to goddess-like perfection.

[I am typing this with the top button of my jeans undone because I just ate a whole rotisserie chicken.]

Here are a few things that have helped yield a more positive, awesome me. They just may work for you too:

No, not to make your teeth permanently straight – really, after a year or more of tasting metal, who wears a retainer? – but to give you that initial kick-in-the-nuts to start smiling more. Smiling is hot. Everyone looks good with a smile.

[Yes, you too, you there with the “not-so-white” or “less-than-aligned” chompers.]

My teeth are pretty much back to pre-brace status quo because the ol’ “tongue thrust” really has no other direction to go but forward. But I still smile like I’m being filmed for a Colgate ad.

[Note: as a child, my father would routinely ask my mother – within earshot of my sister and me, of course – if there was something “wrong in the head” with “that one”. It seemed whenever I would be comfortable, my tongue would be out. Get me cozy and my mouth was hanging open, my tongue fat and lifeless and beyond the confining limits of my teeth. It was my relaxed position; my mouth’s downward dog. My orthodontist fashioned a sweet little number to help rectify the problem – a retainer with razor sharp spikes which darted down and back from the roof of my mouth – but I was beyond rectification. And I’m pretty sure it just made my tongue swell.]

So try it (not the spiked retainer, the smiling). When you’re feeling your shittiest, grin like you just found the hidden jacuzzi jet. You’ll be hot-as-balls before you even have a chance to feel like an asshole who’s grinning to him/herself.

2. Turn off that defensiveness reflex.

It was seventh grade. Lucky for me, tightly rolled, thick, black bangs and pre-pubescent chick mustaches were all the rage. Not so lucky for me, none of my friends seemed to have caught on to the trend. Being amongst the swarthiest of my small town’s teen population and with hair textured not unlike a pervert’s moustache, I was a catch. The guys in my class would flirt with me by saying hilarious little things to get my attention: “You have hairier arms than my dad” or “Can I borrow your sun visor?”. And then they’d snicker in groups when I would slow dance with the tall, quiet girl from the volleyball team on the periphery of the couples’ circle at school dances. I knew what their laughter meant: man, I wish I was the tall, quiet girl from the girls’ volleyball team.

If I were wanting to be a miserable person, I may have seen something callous in their behaviour. But who wins then? I trust that they were coming from a place of love and I will not harbour toxic feelings of resentment. Plus they were just kids; their balls likely hadn’t yet dropped, bless ‘em.

[Let’s also take a moment to bless the mind-blowing technology that is laser hair removal.]

You ever sing while you’re driving and get so into it you can’t help but feel you’re actually performing? I do this all the time. What starts as just cheerful humming soon becomes really intense yelling at my windshield with an occasional, pained, boy-band glance at myself in the rear-view mirror for music-video effect. And if I miss a note or if my voice cracks (like a dude’s) I will have an actual moment of embarrassment. Then I will have ten minutes of laughing at how hilarious it is that I messed up my make-believe music video audition and actually got embarrassed.

Change the station. Repeat. Get your happy on.

Evidenced below, I have a giant head. Always have. My mother insisted it was because I was so intelligent I had to have a big head to fit that big ol’ brain of mine. My dad’s already nagging fears were heightened as, at four-years-old and with my tongue hanging out, my head circumference was bigger than his.

In the 90’s, it became a really cute and endearing thing for junior high school girls to wear their boyfriends’ baseball hats; their shiny pony-tails bouncing and twirling through the hole in back. This was not an option for me. It may have been the fact that I didn’t “have a boyfriend”, per se. Mainly, though, I blame the head girth, exaggerated further by my thick, wooly hair mom insisted on brushing out rather than allowing to curl. As I got older, however, I discovered the blessing that is a big ol’ knitted hat or beanie. The bigger, the better. It fits all your shit. Win.

For some of you, a hat might not be the answer. The point is, for something as trivial as a physical oddity, there is likely a quick fix and you should not let any ugliness you bestow on it (momentarily, of course) penetrate that beautiful spirit of yours. That’s what people who truly see you will notice. I bet those of you reading didn’t even realize I had the head girth of a young wood bison.

5. Don’t beat yourself up about the past. It’s passed.

When I was in Brownies (before Girl Guides), I fell in love with a girl because I thought she was Atreyu from The Neverending Story. I’m not sure exactly how that illustrates the point I’m trying to make, but I think it’s a hilarious story. Back on track: if you did or said stupid or embarrassing things in the past, whether it was yesterday or years ago, let it go. Set it free from your world without and within. It no longer exists unless you let it. All you have is right now. As I type this, a friend just posted the following Facebook status update:

As difficult as it must be to believe, I do and say stupid shit all the time. My first day of work as a Physiotherapist, I took a call from a case worker with Workers’ Compensation. I was surprisingly flustered (my manager was standing right behind me). At the end of our conversation, what I intended as “you’re welcome” or “no problem” came out as “your problem”.

I allow myself five minutes of self-loathing and then apologize to myself and move on.

6. Laugh at yourself, goddammit!

Find humour in the things that would otherwise induce rage blackouts. Laugh it off rather than burst the ol’ arteries. This may come as a shock to you, but I tend to use self-deprecating humor as a form of self-acceptance. And it works. Don’t take yourself too seriously. 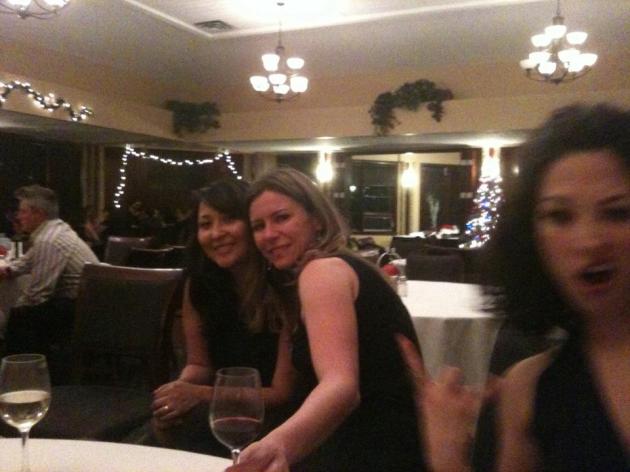 That should be enough wisdom to get you through till the end of the week. I’m stopping at six (6) because it’s my lucky number; it was my number in volleyball (speaking of which: Facebook creepily tells me the tall, shy girl is married now and has two beautiful children, in case you were curious. At some point I’ll have to thank her for all the dances. And for letting me lead). And also because it’s late and I’m drained of wit.

4 thoughts on “Half-baked Recipe for a Happier You”