WARNING: Mustache poetry, contained herein, may be offensive to some HOAR readers. Reader discretion is advised.

First off, I’m sorry. It’s been a while, I know. July was a pretty crazy/busy/thoughtful month. I started writing that book I promised myself. It began as a novel. Then it switched to a book of essays. Now I’m looking at both and wondering which one to dive into. So I decided to blog instead; climb back onto the rock, so to speak.

I spent my thirtieth birthday in Toronto with mom’s side of the family, the self-avowed “crowd of savages”. We were all there – a slew from out east, a slew from out west, all congregating in the middle – for my cousin Ashley’s wedding. The wedding was great. It was set in what I can only (likely incorrectly) describe as a “tree sanctuary” and (perhaps illegally) confirm was the set location for all the forest scenes in the Twilight films. It was stunning. Very green and magical. Just like the happy couple – very green, very magical. That’s how I describe all vegans, but especially these two crazy love-birds.

Most of the family camped out at my aunt’s house in Aurora while Jenn (sister), Mike (sista lova), J and I lapped up luxury in an amazing two-and-a-quarter-star hotel in the fashionable “Airport District” of metropolitan Toronto. When trying to air out the cozy stagnancy of their room, Jenn and Mike were pleased to discover their window faced the interior of the hotel; an enviable view of the continental breakfast diners – their yellow, rubber eggs stabbed with fresh disappointment – greeted them each morning. J and I settled on the energizing view of highway 27.

The focus and the highlight of the week was Ashley and Dave’s amazing wedding. It was perfect. Which is why I’m gonna go ahead and devote this blog entry to my birthday.

We all arrived on Thursday, July 26th. My actual birthday was the following Wednesday, the day everyone had scheduled to depart. So we decided to celebrate Tuesday evening.

A delicate people our party was, we needed to eat somewhere that was both vegan friendly and gluten free. We lucked out with Rancho Relaxo. Customary sarcasm aside, my ‘faux steak’ and ‘faux chicken’ enchiladas were better than the real deals. Customary sarcasm reinstated, the combo of faux meat and refried beans left us feeling neither bloated nor gassy; my overly starched orange shorts were most certainly not riding up my arse; nor was their top button undone for the remainder of the evening.

After our meal (thanks mom!), we were informed that Rancho’s dessert menu was temporarily under construction and limited. Now, I’ve got a devilish palate for deep-fried soy ice cream, the lone menu item remaining. But someone suggested going elsewhere for dessert and coffee.

We were just outside the trendy “Kensington Market” so finding a dessert place would not be a problem, we thought. Yet as we wandered down the main strip, we were disappointed to discover that – unless we wanted more Mexican food – we were shit outta luck.

It was, after all, after ten o’clock on a Tuesday evening.

“We’ll walk through Chinatown. We’re bound to pass something”.

So through Chinatown we walked. And walked. Granted, I was drawn to the shiny duck carcasses hanging proudly in the shop windows. But the (completely realistic) idea of a cozy, jazzy, dimly lit espresso lounge serving slices of homemade cake and pie was too tempting. So we marched forth.

[Note: March 4th, Ashley pointed out earlier, between sips of sangria, is the only date that is a command. Pretty sweet little tidbit. Pretty cool birthday to have. I urge all you potential baby-makers out there to consider getting your freak on between June 7th and 15th.]

I hadn’t thought my footwear through. Pretty sandals were not made for distance walking. My feet looked like two bloated tunas wearing thongs. In a deserted side street of Chinatown, we played musical shoes; I ended up wearing Jenn’s sandals, Jenn ended up wearing mom’s sandals and mom took one for the team and wore mine. It made sense at the time.

We walked long past Chinatown and Jenn suggested either Second Cup or Starbucks, at kitty-corners of the intersection of Queen and Some-Other Street. With fleeting hope, I forced myself to stick to the goal. Stale oatcakes just wouldn’t cut it.

We wandered down a strip and came upon a trendy looking restaurant that looked remotely promising. It was only once they managed to seat the eight of us that we realized their dessert menu could accommodate our celiac friend but not our no-dairy friend. And, my aunt then realized, she had indeed been here before. And the desserts were shit. So we snuck out.

Across the road, another generic chain restaurant appeared and seemed to be our last hope. The dietarily-restricted folk would have to settle with their one-flavor of shitty gelato. But we were beyond expecting to please everyone. It was late. We were tired and full of Mexican food. More than anything at this point we just wanted to sit. And I think the family felt bad because it was my birthday, otherwise I’m pretty sure they would have bailed after the colorful window displays of greased-up animal cadavers.

But, when they sat us upstairs in cafeteria lighting with far more ketchup bottles than any table should need and with Afroman blasting through the speakers, we decided that our night could not end this way. We could not sell out like this. We had come too far. Sweet Jesus there had to be something! We’re in Toronto!

So we headed back in the direction of Starbucks and Second Cup – far from original but at least slightly jazzy, cozy and with less ketchup. Only to find that each boasted a seating area of four bar-stools.

“Let’s get M&M’s and sit on a bench somewhere!” Jenn helpfully suggested.

In one last fit of desperation, we charged toward the big, bright sign in the north (or west or east or south; I have no fucking clue where we were at that point) sky. That’s right: we ate Mexican on a budget at a hidden-gem-hole-in-the-wall on College Street but GD-it we were gonna eat GD cake and coffee at the MF’ing Hilton.

No one really spoke. We were a group united, rising one last time from defeat, overtired and deleriously determined. We charged through that swanky lobby like we owned the place. And own it we did. Right up until the sign stating that the restaurant had closed at 11pm.

And so, leaning against a dirty wall somewhere, eating Timbits, we sang Happy Birthday to me. Then said our goodnights.

We got back to the hotel to find that Jenn and Mike’s room-with-the-view had been flooded. The only room in the entire hotel that had been flooded. Clothes, bed, shitty carpet – all soaked. At about two in the morning we moved them to their new room and binge ate sour cream n’ bacon Ruffles. Okay, I binge ate the Ruffles.

[Oh, and don’t worry about their hotel room misfortunes; the manager handed Mike a crisp $20 the next morning for their troubles.]

Our original plan of getting up early to go to Eggspectations for breakfast (I f’ing love that place) before Jenn and Mike’s noon-time flight was dwindling.

The next morning was a mad rush to pack and check out. Plus I knew Jenn and mom were leaving so I was an emotional wreck. We raced to the airport just in time to discover a two-hundred-man line-up. Apparently several flights had been delayed the day before.

It was depressing. I didn’t want them to leave. It felt too soon.

And then in a flash of birthday luck, Jenn’s and Mike’s flight was delayed. New boarding time: 22:40. Despite Jenn being really inconvenienced by this – a pressing school project and a four-year-old waited for her at home – I was selfishly stoked! And I think she warmed up to the idea after a while. We got to spend my actual birthday eating like pigs at Eggspectations and shopping Yonge Street. I bought magnetic mustache poetry and an umbrella. What else does a thirty-year-old need? It was great. 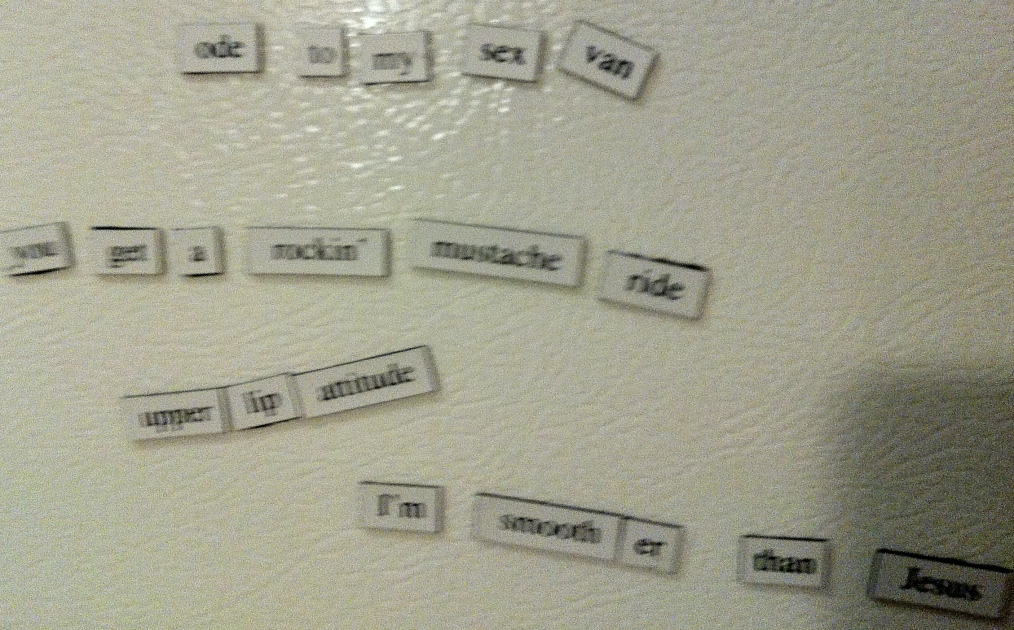 Note: Poor photo quality is probably for the best.

That night, J and I cozied up on my aunt’s couch back in Aurora. It was a perfect ending to a perfect birthday, imperfections and all.