I bought a zoo membership. It’s not typically something I’m into, going to the zoo. I might check it out once every few years. But being on maternity leave forces you to find different ways to occupy your time in order to keep the baby stimulated and to keep you from passing out on the toilet at home from sheer exhaustion.

I don’t think I mentioned this before, but I have an irrational fear of bears. I know you’re thinking, “no, bears are dangerous. That’s not an irrational fear”. But I’m for sure talking “fear” of the irrational variety. As in, if I walk along a tree-lined trail in the middle of the city, I have the fear sweats. Despite the fact that people always say “no bear has ever been sighted in this area” I am convinced that I will be the first person to ever “sight” one. And to, very quickly thereafter, have one cut its giant baby teeth on my skull. Ignoring the inherent narcissism in what I just said (one neurosis at a time, people), I show definite signs of ursaphobia.

Long story short, I took this picture of a black bear today. This is not magnified, this is actually how close I was. 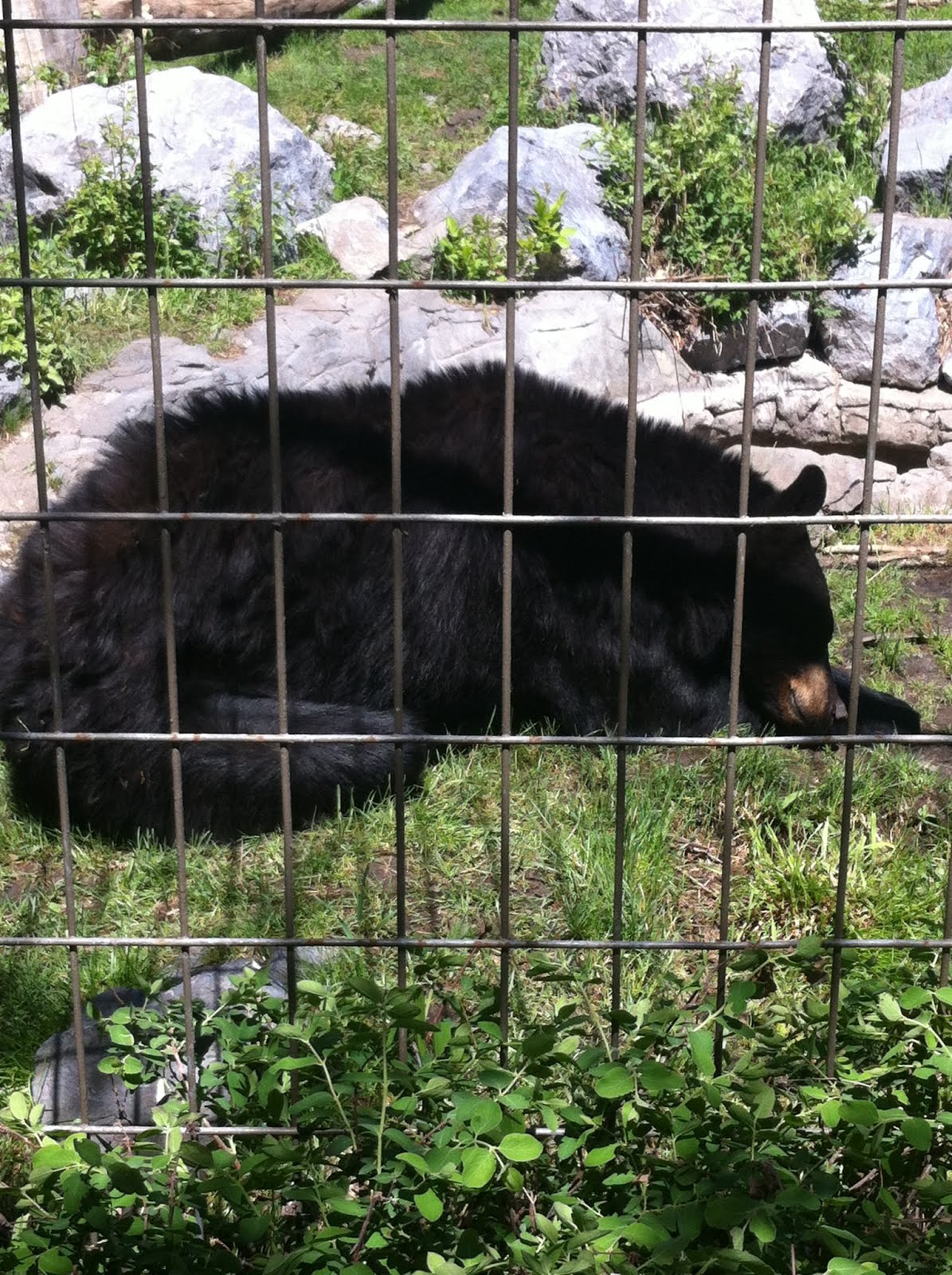 On an unrelated note, I also – while at the zoo – took this picture of my baby wearing aviators, a cardigan and no pants. And apparently, a do-rag. I took the liberty of giving him a beard to protect his identity. It’s just a bonus that I’ve always loved drawing beards on things. 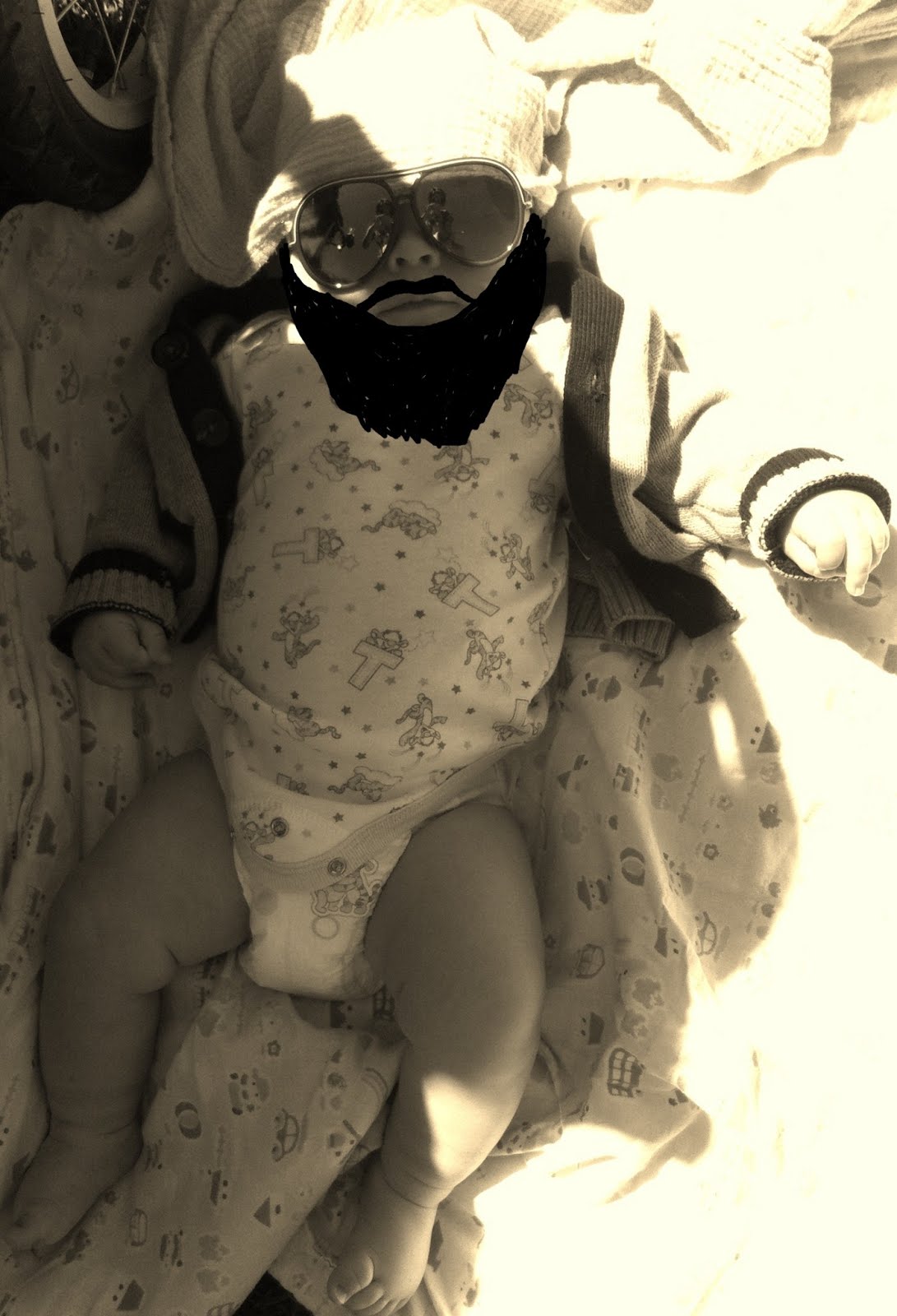 I’m getting sidetracked. I digress. Where was I going with this? Ah yes. Peacocks. Do you know they let those things roam freely in zoos? That’s insane!

Here’s a bird with a known ego, an in-your-face, something-to-prove attitude and Vegas show-girl attire, to boot. We’re gonna go ahead and set it loose in front of your children who will likely provoke the flamboyant “kitty” and (earmuffs, kids) potentially have their eyes pecked out in a display of fabulous aggession.

So I’m sitting on a bench with a friend who also has a baby. In front of us is a giant, beautifully manicured grassy area of the zoo. Immediately behind us is wooded; huge evergreens and mulch. We’re both nursing the babies when, in my periphery to the right, I see a strutting peacock. He’s sort of walking in our direction, but they have such an air of indifference that it’s hard to tell.

For most people. I can always tell.

What exactly can you tell, Heather?

Thanks for asking, mom. What I can tell is that an animal, any animal, given free will and space to roam, will attack me and those unfortunate souls who share my company. I am an animal whisperer. And what every animal is whispering is “Heatha…you go’n git it”.

[Best not to question the accents of the animals. It’s just how they occur in my head.]

Ironically, my friend, Jen, was in the middle of telling me how she is deathly afraid of birds, right down to pigeons. So I felt obliged to point out that Cher, the Bird – though quite some distance away – seemed to be meandering in our direction. Jen seemed remarkably calm, and continued to gaze down upon her feeding babe. She said he’d likely just walk right past us.

Uh oh. Our friendship is relatively new. She doesn’t yet know about my sixth sense. The animal whispering one.

I tried to keep my voice calm and pretend I was also gazing down upon my nursing babe. When really I was just gazing at the grass to my right at just the precise minimum distance required to see the little F’er in my periphery. My nipple may very well have been in lil M’s eye, bless ‘im. My mind was wholly elsewhere.

That’s when I got the feeling I get when shit’s about to get real. The same feeling I got repeatedly the night I babysat the demon cat (https://heatheronarock.com/2012/06/28/crouching-tiger-hidden-adventures-in-babysitting/).

This thing is on to me. He’s smelled my fear.

Before I even finished the thought, the fucker (dollar for the swear jar) started the slow, threatening emergence of its insane feather display and turned to face us directly. And to stare into the pits of my mind.

With that the bird did some sort of ruffley thing with its feather display that made a hiss sound. He was ready to party.

At this point he was about fifteen feet away from us. He took a few steps towards us.

“He’s not gonna do anything”.

I stood up on the bench, my baby still latched on. I think.

Cher knew he had me. He started running towards us.

That was it. I bolted into the trees behind us.

“Run!” I called back, and she was at my heels in seconds.

That’s pretty much the end of the story. The flapping boob was the climax. The demon bird backed off finally but held vigil between our deserted strollers. We were too afraid to go back. We struggled through the trees until we were on the main roadway and headed back to the greenspace. At this point, a camera-happy crowd had formed around the crazy bird, which looked like he may have mistaken our strollers for sexy lady-birds. He seemed to be defending them in all directions. We managed to find a firefighter (no kidding) in civilian clothing. It was not without fear and careful dodging tactics, but he managed to save our strollers, one at a time.

We ended up sitting on the far end of the greenspace after that. The peacock stayed put, his feathers still displayed, walking in slow circles to amaze onlookers. Cocky bastard. Or should I say PEAcocky bastard! Huh? Huh? Am I right?

[I need to start hanging out with adults more.]

For the record, lil M kept his cool the whole time. I’m so glad he’s still too young to see what a pussy his mother is.

3 thoughts on “Babies and Boobies and Birds, Oh My!”