Eating wet things off the floor: It goes against everything we believe in. Things like “dignity”. “Basic hygiene”. “Not being vermin”.

Now, dry things? A cracker, some popcorn perhaps? Have at it! But what about when it’s saucy pasta? A chunk of watermelon? A spoonful of chilli? It’s just wrong.

I pondered this this morning as I swiped a blob of lil’ M’s yogurt off the unvacuumed carpet with my finger and, without a napkin handy, tucked it away in the confines of my mouth. Honestly, the only reason I gave it a second thought was because of the unidentified crumb of something I then had to pick off my tongue and carry, clinging to my finger, to the sink to be rinsed down the drain. A task which, presumably, was too daunting for the original yogurt blob.

Now, to be clear, if I were reading this, I would be sickened. I would say “f’ing gross” out loud, as you just did.

But I’ve found, perhaps from getting older, perhaps from phlubbing a drenched human outta my loins… that I just don’t give a shit, ya know? Because, as a great Scandinavian poet once said, “at the end of the day, we’re all f’ing gross”.

[No poet ever said that.]

[Stay with me, it gets better.]

You remember that t-shirt; you either loved its wearer or wanted to give him just the quickest flick in the ol’ he-nads. It’s the t-shirt that read: Everybody Poops.

[It may have originally been a Japanese children’s book, but it was the t-shirt that really did it for me.]

It was one of my “a-ha” moments (*somewhere in Chicago, Oprah grimaces, sighs heavily and rests her forehead wearily in her palm*).

I loved it immediately.

Everybody poops. Even really, really attractive people. Even Kate Middleton! What a refreshing concept.

That’s not to say “have zero dignity”. It’s not to say “go ahead and fart on jam-packed public transit”. And that’s certainly not to say that anyone wants to see or to know about your bathroom habbits. It’s not really even about pooping at all.

I like acknowledging our collective weirdness. We truly are all just a bunch of weirdos trying to figure our shit out. Anyone who chooses to judge one of his/her fellow weirdos in any demonstration of weirdness is dealing with his/her own issues of fear and insecurity.

It helps to remember that daily. It helps me forgive myself many a social trangression.

Like the other day, it was hotter than a Game of Thrones hooker scene in my land-locked Prairie neighbourhood.

[For all intents and purposes, let’s call said suburb, “The Truman Show”.]

The Truman Show has a playground with a big fountain at its center. Kiddlings (genuine and “at heart”) can run and splash through the fountain like you would a garden sprinkler back in the diz-ay (as nan always called “the day”).

And with Calgary at the exact temperature of a hockey player’s post-game ballsack, of late, this fountain has been a popular spot. My lil’ M was one of many splashing around when a song came on (some family brought their ghetto blaster; am I saying that correctly, “ghetto blaster”? I thought so.).

I LOVE when he hears music. He literally shakes with excitement, his jaw clenched, bottom teeth exposed. 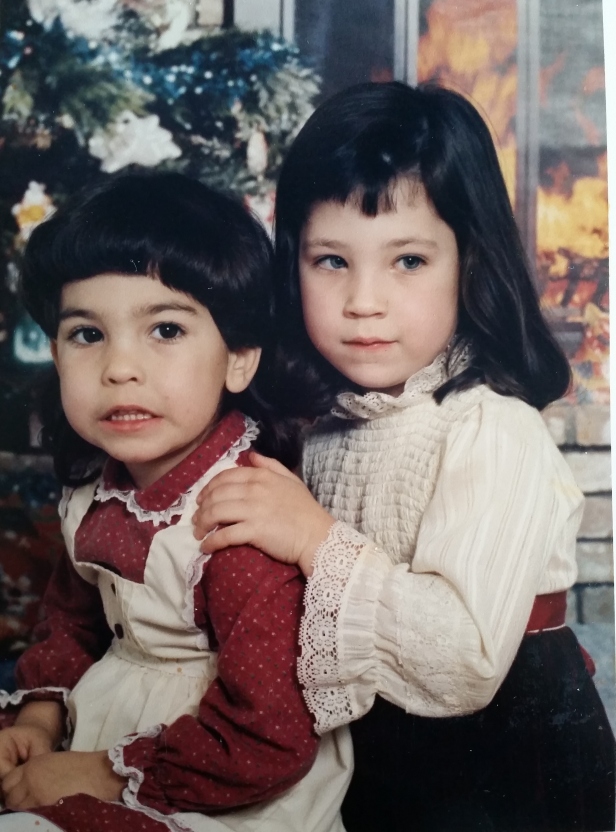 I’m dusting off this little piece of art because it’s exACTLY how lil’ M looks when he hears music (except with actual life in his eyes).

Photo backstory: Believe it or not this is not a candid Christmas shot taken in the living room. Despite Jennifer’s childhood habbit of placing both hands gingerly on my shoulders and trying not to cry as she conceals some secret horror whenever we were chillin’ on the homefront, this is actually a professional photo.

And we were not being the easiest of subjects for the poor photographer. Mom, brilliantly employing the #1 parenting tool which I whip out on a daily, bribery, told us if we smile as big as we can we will get a treat. Knowing Jennifer’s knack for only smiling on the inside, I took one for the team and stretched my face as far horizontally as I could. And kablammo! This gorgeous gem was born.

What Jennifer lacked in bangs symmetry and joy, I made up for in zany brow fur and mullet curl perfection.

Anyway, I really try to rev lil’ M up as much as possible by rocking out to whatever tune is playing. Seeing me let loose is his unspoken permission to bust out his wildest moves.

[One of which is him locking his neck in 90 degrees of side-flexion and moving the unilateral shoulder forwards and backward violently. It works for both slow songs and fast songs.]

So I start dancing. And lil’ M loves it and he starts grooving. And it’s great. And I’m so focussed on him that it isn’t until about thirty seconds into our little public dance-off that I realize what is happening to my body. I am doing something that was once thought physically impossible amongst members of any demographic outside “white males over 85”.

Get ready for this:

I’m sticking one hip out to the side.

And doing a double finger point/jab out to the same side.

Then repeating on the opposite side.

Not to any semblance of a beat.

But I fought the reflexive urge to tone down “the elderly wedding uncle”. Instead, I reminded myself that everybody poops. Granted, not everybody dances like an asshole. And I may have looked like I was actually pooping. But that thought was all the reassurance I needed to up the ante on the ol’ finger air jabs.

[There was a moment I even tried to fit in three air finger-jabs in one stride, but I dialed it back after that. No one needs to get hurt.]

Especially since becoming a mom, I find it helps sometimes – as you sweat and flail in your undirected efforts to keep a tiny, wiggly person happy and stimulated (alive) – to be reminded of the ways we are united. In our gross, weird humanness.

And that perhaps we all may, in a pinch, eat wet things off the floor.

P.S. It was my birthday recently. We ordered Chinese food and rented “Rise of the Planet of the Apes” (2011). The rental choice made me feel like that sexy chick who’s just “one of the boys” and does cool things like play beer pong and ride a long board and watch Planet of the Apes… Except that I ugly cried and shut the movie off as soon as Caesar got locked up. And things would have gotten super heated were it not for the painful MSG bloat and the goal of a “good night’s sleep”.

P.P.P.S. Stay tuned for next week’s post when I tell you all about how I ran away and got married! Just like Bruno Mars told me to.

4 thoughts on “Everybody Poops. So Be Weird.”