I downloaded your app.

My husband recently started a new job. Last week, they were having their first brunch potluck since his arrival.

I wanted to really wow them. None of this quiche business; shit’s been done. And muffins? Who do I look like, Susan?

[For the record, I have no beefs with anyone named Susan… but speaking of “beef”, fictional Susan in my head makes a mean beef stroganoff.]

So, I put my fate in your appy hands; the fate of my future reputation as the mystery wife who “works and has kids and still manages to make this adorable, sinfully delicious dish that we’ve never tried before. Also, she seems really attractive and interesting”.

I typed “brunch” and perused the usuals – things with eggs and/or bacon – when suddenly, there it was; the pot of gold in understated, “oh, this ol’ thing?”, bougie breakfast brilliance: Greek yogurt breakfast bark. 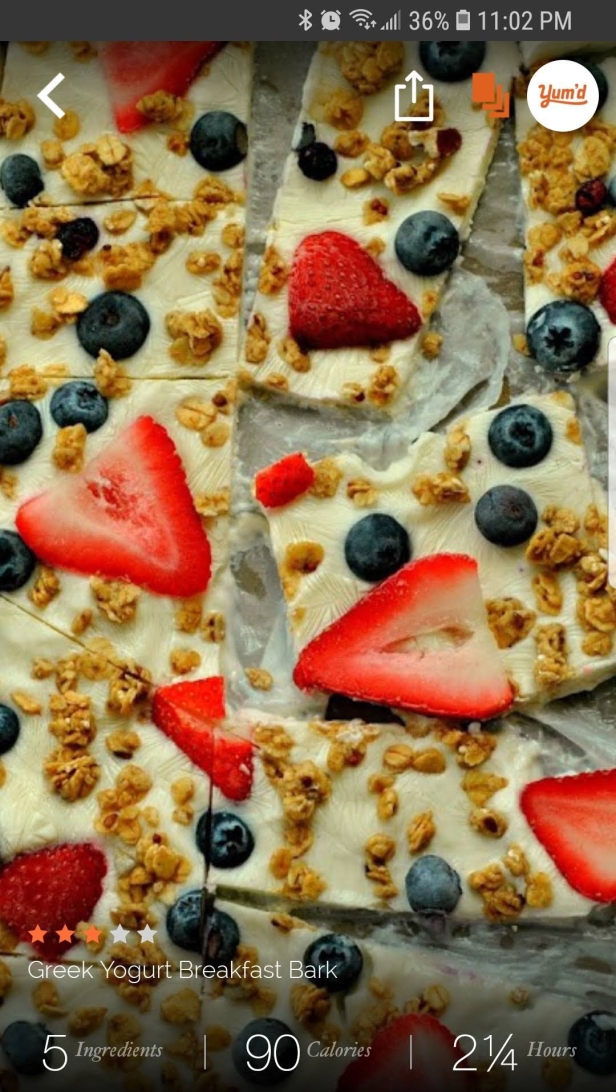 Now, I’m a big fan of making bark at Christmas time. You just melt chocolate, add things to it, let it solidify again, break it into haphazard, asymmetrical pieces of various sizes and BOOM! You’re goddamn Van Gogh in an apron. And you’ve literally “made” nothing! It’s brilliant!

So this looked like the brunch potluck holy grail of shit to make to impress people you don’t know. And super easy!

But it wasn’t until I mixed the five ingredients and poured the mixture perfectly onto parchment that I became aware of its final destination.

What? I don’t follow. Serve immediately? As in, immediately after it sets and returns to a comfortable temperature for handheld eating?

It was frozen yogurt. But not the soft, smooth, sweet and silky frozen yogurt we know and love. It was just straight up yogurt… that spilled and froze onto your car windshield, perhaps.

Early that morning, I stood at the freezer, barefoot and cold, taste-testing (gnawing on) a flavorless shard of glacial ice. It was uncomfortable and offensive to all senses. My weak-enamelled teeth were zinging like I’d just chewed on tinfoil.

Ever eaten a frozen blueberry? It evokes a mouthfeel not unlike that of a freezer-burnt bug. And the larger berries? Well, if your teeth are as sensitive as mine, biting into a frozen strawberry is like pinching your raw, oral nerve endings with tweezers, and then blasting them with dry ice.

But don’t worry, with all the temperature-derived unpleasantries, at least you can fall back on the flavors…

[And I don’t mean the fruit or granola – they are zapped of all flavor the second they hit sub-zero. And the piddly amount of maple syrup (grossly short-handed)? That sweetness clearly also died in the frost.]

…There was nothing muted or iced-out about the natural, ever-mouthwatering flavor of the plain yogurt. And nothing says, “mmmmmmm, glue and vinegar” quite like plain fucking yogurt.

So, on a Wednesday morning – the morning of Halloween, no less – amidst the usual frenzy with two small children and breakfast and packing lunches and catching the schoolbus… I had to spend several minutes busting apart icy shards of failure and regret. With my bare hands. Bullets of frozen granola shot at various trajectories around the kitchen (one into my cornea) with each God-forsaken frosty snap.

My hands were freezing but, thankfully, within moments of touching the solid chunks of culinary shame, the bark began to melt; not in a rich, chocolatey way, more like a watery, bird-shit-esque, plain fucking yogurt way, bits of berry guts tagging along for the ride.

I stood there, frozen (literally and figuratively) for several minutes, paralyzed by esophageal frostbite and the realization of my massive potluck blunder.

I gave myself a little mental pep talk:

You should have made a quiche! The answer is always quiche, dammit, who do you think you are? YOU’LL NEVER BE HALF THE WOMAN SUSAN IS!

Anyway, my husband sampled it and – even with the enamel strength of an adolescent bull shark – he felt it was “pretty fucking cold”. Although he did give some uplifting feedback, like, “are you supposed to taste the things in it?” and “soooo… should I still bring it to work?”.

I was twenty minutes late for work, detouring to pick up cinnamon buns at the grocery store and backtracking to drop them off at his work.

It was just after 10 am when my husband’s manager wrote to inform me that “the bark was a hit”. I initially assumed this was a typo and that she was telling me someone was hit by the bark, perhaps by a rogue shard, and they were, inevitably, dead. But no, she had made an apple crisp and forgotten the cream at home, so a chunk of bark made – who knew? – the perfect alternative.

So, Yummly, I guess what I’m trying to say is:

One thought on “Dear Yummly…”