Today was the start and end of my career as a model.

You’re a model?, you ask your laptop/iPhone.

Fuck, no. Here’s what happened…

I arrived in Calgary in July, 2011, determined to break into the big city acting biz. I got new headshots. I got an agent. I went to one audition (which I found on my own) and one (resultant) call-back. And that, my friends, is the extent of my acting career in Calgary, thus far.

I find solace in writing dis ‘ere blog. Helps me circulate the ol’ creative juices. But I do miss acting.

Anyway, this weekend I had a missed call from the agency. I was pumped. This was the first time they called me!

My agent’s assistant was calling to tell me, in a sweet British accent, that they wanted me to go to a screening (I guess) for a photo shoot. It was to take place Tuesday (today). They’d shoot me and, if I get a call back, I’d attend the official shoot this coming weekend.

“There will be twenty others. Show up with minimal make-up. Bring nothing but your lovely self.”.

Now, there is no part of me that wants to, or has ever wanted to, be a model. If I’ve done the occasional photo shoot I’ve done so because I thought it would spruce up the acting resume. That and I was probably broke.

[Check this out:  http://www.junglejims.ca/. I want in on that birthday cake action like it’s nobody’s business. Note: being used to acting and, perhaps, over-emoting, the photographer had to actually stop the shoot at one point to tell me – in not so many words – to tone down my face, because it’s making me look like a crazy person. Believe it or not, this shot was taken after that advice.]

I only wish overzealous, crazy face was all that stood between me and the title of Canada’s Next Top (Newfie, Half-French-Native, Half-Up-Da-Coast) Model. But it’s not that. Just as it’s not the fact that I’m 5’5, one-hundred-and--cough-cough-choke-cough-gasp-cough-cough-…where am I?-pounds. Or the fact that I have dad’s delicately puckered yet strong and meaty thighs. Or the fact that I’ve had baked beans for three meals in a row and am, in the sagacious words of my father, “blowed up just like da harbour tomcod”.

It’s not any of those things. It’s a (self-diagnosed) condition that I have had since my early teen years. See, I can smile effortlessly in day to day life. I love smiling. And if someone wants to take my picture? I can usually pull it off. But if I have to smile for a camera in front of onlookers? Boom. Prom-Face Palsy.

I only wish I had the pictures to back up what I’m talking about. Before the actual “grand march” ceremony at my high school graduation, my parents took tons of pictures in which I look like a perfectly normal teenager in Barbie make-up and, what appears to be, a sea-shell bra. Then, mere hours later, in the same shiny, butter-yellow cake-dress, amongst an audience of hundreds, my face takes a drastic plunge. 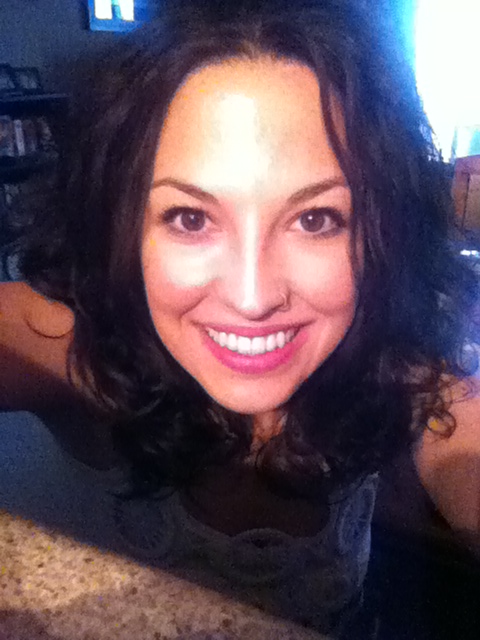 Here ya go. The genuine selfy. What a peach she is.

As you can see, despite great efforts  by my front teeth, the corners of my mouth have been pulled heavily into a downturn. If this were a video, you would also see my mouth quivering as I try to fight it.

[I only wish I was making this up.]

In an attempt to outsmart the condition, I think, Ah ha! Everybody knows the most important thing is smiling with your eyes!

…Not so much, when ya got the the prom-face.

Who knows? Maybe the eyes didn’t smile quite so vigorously. But everything else is the brutal truth.

The “models” who went before me were each in front of the camera for a solid three minutes. I was there maybe eighteen seconds. And I seriously want to send a thank-you card to that photographer for wrapping it with such haste. My mouth quivered and slithered so much that, by the end of it, there was not an upturn in sight. Just, raw, uncensored PFP.

[If I were an onlooker, I would have been frantically reviewing CPR skills in my head.]

I could not have gotten out of there fast enough. I drove home in a lightning storm (literally – in case that just sounded like an out-of-place metaphor. The weather’s been crazy here.). And as I seductively lip-synced Moves Like Jagger to myself in the rearview mirror, there was the smile we (mom) know(s) and love (tolerates on most occasions).

From now on, acting auditions only. Preferably for angry roles.