I wanted to write a post about how intense the ball suckage is when it comes to applying for jobs. Especially jobs that, deep down, you don’t really care about.

Then I had a glass of wine. Then another. This one’s the third. For those of you thinking, shiiiiit, girl, this shit was funny before but I’m thinkin’ you gotta problem, girrrrl…

…Chill. Unbunch those panties (grossest thing I’ve ever typed). It’s the first time I’ve had wine in several weeks. I think I’ve fallen out of love with it. But tonight it’s just cold and rainy… and it was available, so why not?

So I sat down in front of the laptop to write and got distracted by a video of an awesome high school commencement speech by a teacher in Boston. Which then, obviously, landed me on a stream of Taylor Swift music videos on YouTube. I honestly can’t recall the convoluted path that lead me there, but man… She did not see that canoe proposal coming.

Anyway, after fourteen minutes of furiously weeping for T-Swift’s misfortunes in the game of love, I reflected back on the message in the graduation speech. And I started questioning what sorts of jobs I even want to be applying for.

I suddenly felt as committed to this job search as I was that summer I decided I’d become a lounge singer on a cruise ship. [Not even kidding.]

I thought maybe I should take a shower to clear my head. Re-gather my thoughts.

Now, avid HOAR readers are aware that my dead, dead hair falls out in the shower. Annnnnnd, then I stick it to the wall to spare the drain. It’s sexy in some countries. Anyway, as I stood there waiting for my conditioner to do something for once, I stared at the hair mounds (heh…”mounds”) on the wall and thought: this. is. art.

Ok. I know. It’s gross on initial observation. But if you can be mature enough to drink three glasses of wine and stand in a unnecessarily hot shower for twenty minutes, you will see the true beauty in this one-of-a-kind masterpiece.

What I’m seeing is a tragic glimpse of an elderly couple. He has just died and she has caught him in her arms. She leans down and cradles his limp body. His pipe, having fallen from his lips, still smoulders on the ground.

[It’s Lindeman’s Bin 99 Pinot Noir – delicious – that I’m drinking. In case you were curious. And hey, while we’re here, health check opportunity: Did you know that pinot noir has the highest antioxidant content of all red wines? I kid you not. Sip that shit.]

Miracle #2: The title is in the works. I’m not sure whether to settle on, “A Holy Shower Guest” or “Who Stretched the Cat in the Hat and Where is his Face?”. I feel no elaboration is needed (wanted). 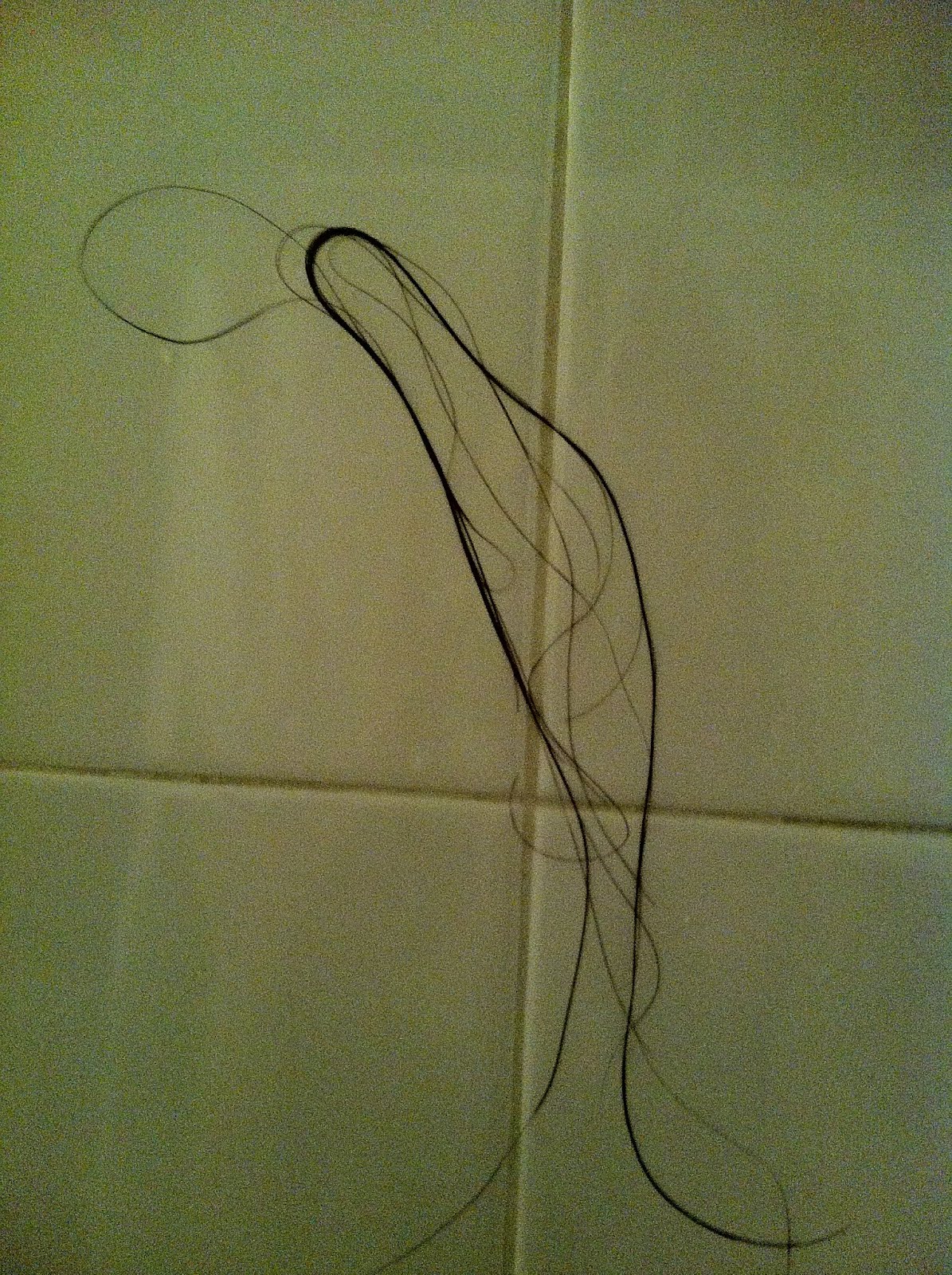 [Note: I in no way altered these hair blobs. My need to point that out is sad for so many reasons.]

And finally: Winner of Homespun magazine’s 374th best photo of the day; I call this one, “New Addition”: 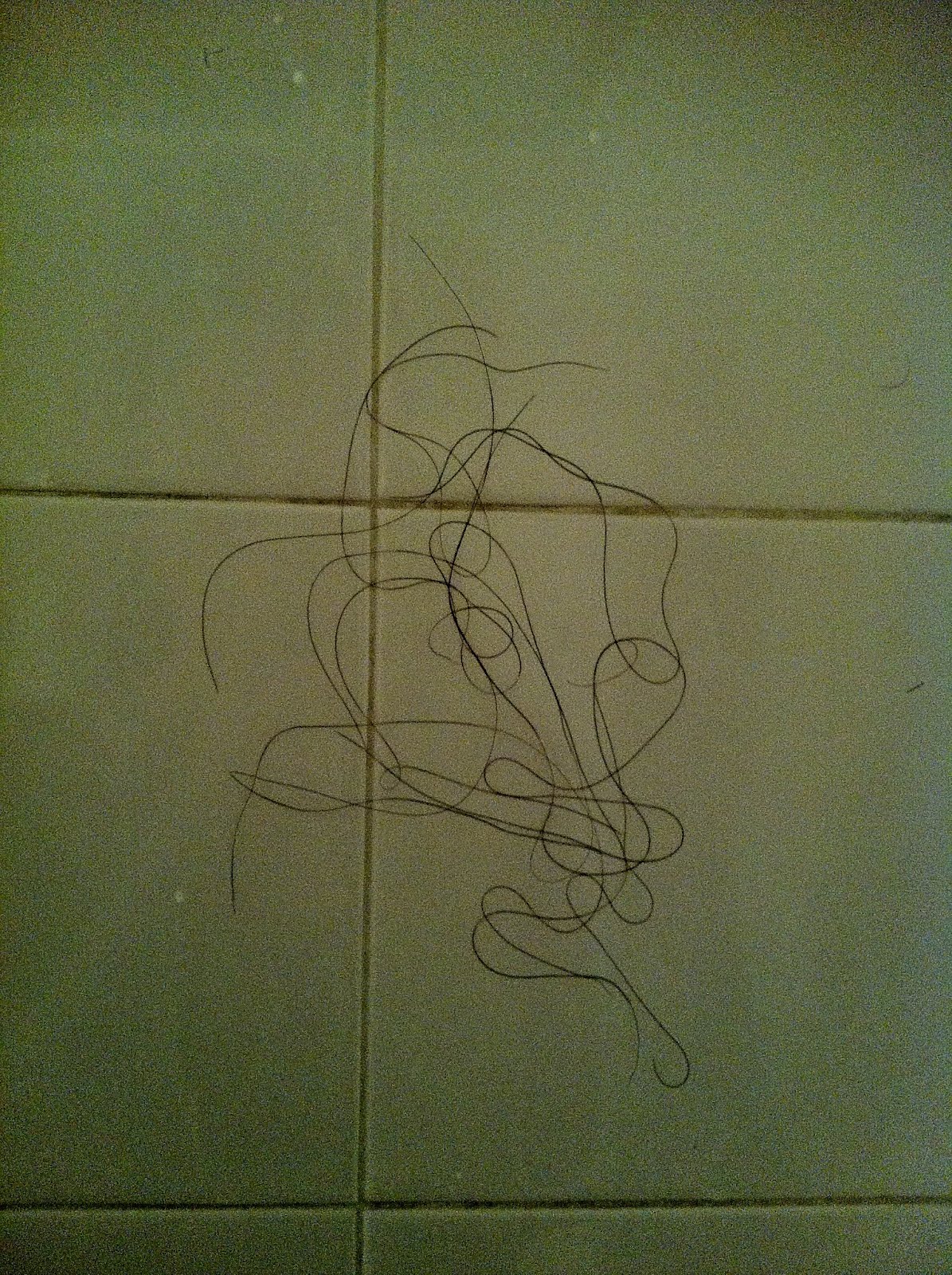 Clearly – if you’ve had a chance to run to the liquor store to buy the Bin 99 Pinot Noir and then consume four glasses – this is a heartwarming image of a couple; the larger partner in back, the smaller partner snuggled in front holding the new baby; both looking down upon their creation in awe.

Three things should be concluded here. 1. Art truly comes to life in the mind of the beholder; 2. Red wine apparently has more in common with LSD than the FDA is willing to disclose; and 3. I need to clean my shower.

I no longer have any interest in looking for “health jobs” and conveying the pain of the search as I’d originally intended. I think because – according to the teacher giving that great commencement speech – we should devote our lives to doing what we’re passionate about. Whether that’s a hobby, a volunteering endeavor, a job, parenthood, a relationship, whatever. There needs to be genuine passion. And, without a doubt, I find that in writing. Even when it’s wine infused and happening on a Friday night.

So I feel I’ve accomplished more here, writing, than I would have if I had summoned Workopolis to “find me a future”.

For the record, I have a job. I guess I’m just a (happily) restless soul.

I hope you’re happy in whatever you’re doing right now.

One thought on “Applying for Jobs. Or Not.”